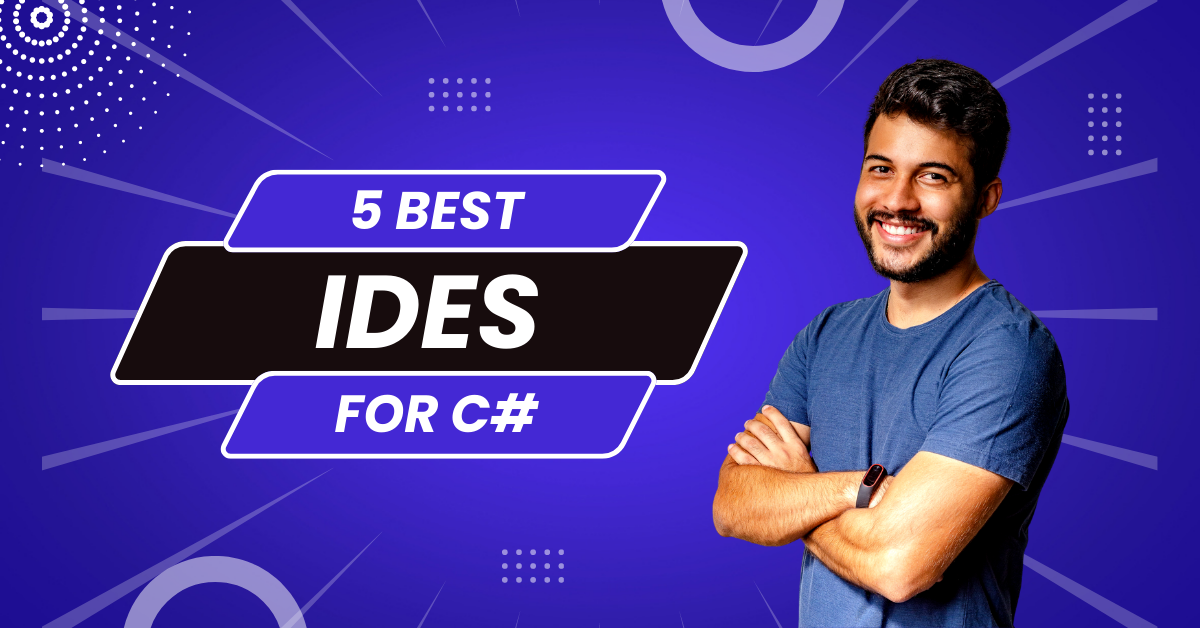 Did you know there are more than 1 Billion users of C# out there? To be one of the best among all these developers you need the best IDE for C# that suits best for you.

In this article, we’ll share the 5 best IDEs for C# and their download links. Let’s start with what C# and an IDE is.

C# is a powerful and versatile object-oriented programming language that can be used for many purposes like game development and web development. It comes with a plethora of features that make it an attractive option for developers.

Most IDEs also have a built-in way to run and test your code. It can be helpful because you can see your code running and catch any errors while writing it.

There are many IDEs out here but the best of them are as follows in best to worst order. But it depends on you that which one is better for you and which one you have to use. Following are some of the best IDEs for C#.

Visual Studio is Microsoft’s flagship IDE for .NET and C# development. It is a powerful and feature-rich IDE that supports a wide variety of programming languages, including C#.

Visual Studio comes with a debugger, code completion, and IntelliSense, as well as many other features and extensions that make it a popular choice for C# development.

Popular: Despite this, the most popular IDE remains Visual Studio Code.

You may download Visual Studio Code from this link.

Atom is also one of the best IDEs for Mac. It’s open-source, free, and strong, with support for many plug-ins built-in JavaScript. Atom’s source code is publicly available on GitHub because it is open-source software.

Atom is developed and maintained by GitHub.

MonoDevelop is a wonderful free and open-source IDE for .NET framework and C#. It’s based on the Mono framework. However, it also supports a wide variety of languages, including C, F#, C++, Python, and Vala.

Code completion: In MonoDevelo, the code is auto-completed whenever you press Enter or Tab on a suggestion.

Syntax highlighting: Whenever you write a keyword or declare a variable in Spyder, it highlights it in different colors, which improves the programming experience.

The Rider IDE is one of the most popular IDEs for programming in C#. It provides many features to make programming in C# easier, including code completion, refactoring, and debugging. Rider also includes several features to help you manage your code, such as a class browser and a unit test runner.

Powerful debugger: The debugger in Rider supports both managed and native code, and can debug applications.

Plugins: Rider comes with several plugins for working with specific technologies, such as Xamarin, Unity, and Azure.

Which IDE for C# is Best?

There’s no definite answer to this question, but it depends on your needs which IDE for C# is best for you. If you need an easy-to-use IDE, then go with Visual Studio Code and if you need more support for C# then go with Rider.

Why IDE is Important?

IDEs are important because they make it easier for programmers to develop software. By providing a single, unified interface, IDEs can help programmers to work more efficiently and effectively. Furthermore, it can also help to improve the quality of software by providing tools that help to find and fix errors.

C# is a powerful programming language that enables developers to create a wide range of applications. Choosing the best IDE is one of the main tasks when starting with programming.

In this article, we have discussed the top 5 IDEs for C# that will help you to increase your productivity.

What do you think which IDE for C# is the best or what other IDEs should be on this list? Let us know in the comments.