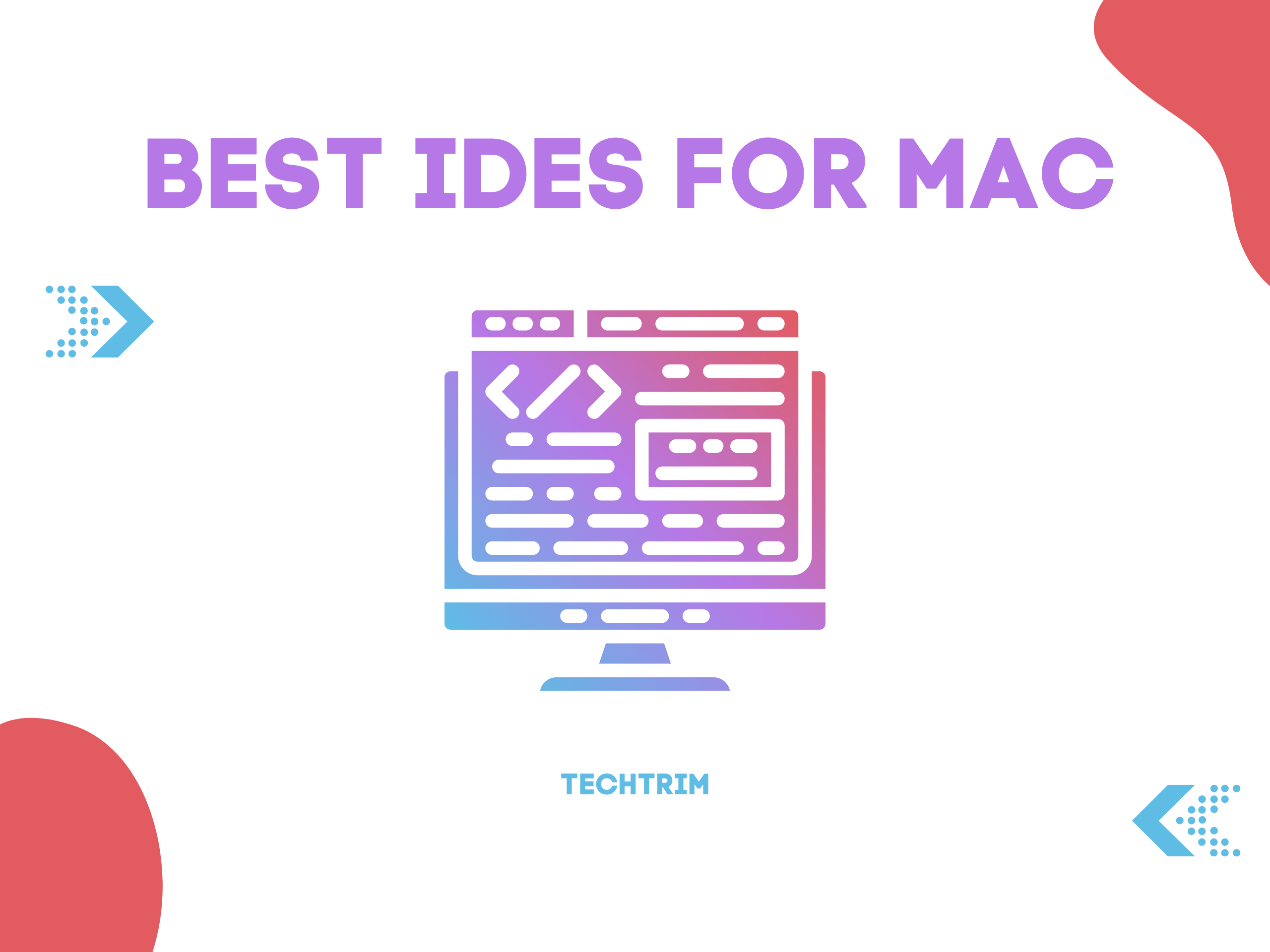 If you’re a developer who works on projects on a Mac, you should look at some of the best IDEs for Mac. These IDEs make programming on Macs considerably easier, and they provide all of the functionality you’ll need to get started.

In this post, we’ll look at some of the best IDEs for Mac and how they may help you speed up your development process.

Before we go into our selection of the best IDEs for Mac, let’s define what an IDE is.

An Integrated Development Environment (IDE) is simply “a computer application that allows you to do things like code editing and debugging.”

Most new programmers eventually use an integrated development environment since they’re used to it from their previous programming experiences in other languages.

The Mac is said to be ideal for programming and development. Various IDEs are used for this purpose. However, the following are some of the most important, popular, and powerful IDEs for Mac:

Visual Studio Code is commonly abbreviated as VS Code. It is one of the most powerful IDEs, as well as the most productive and user-friendly.

Microsoft created and maintains it, so we can anticipate regular upgrades and new features.

VS Code is regarded as a feature-rich IDE. The following are some of the features of Visual Studio Code:

Popular: Despite this, Visual Studio Code remains the most popular IDE.

You may get VS Code for Mac from here https://code.visualstudio.com/docs/?dv=osx

AutoComplete: Sublime Text includes a fantastic function called auto-completion, which allows you to write code quicker and with fewer errors.

You may download Sublime Text for Mac from here https://download.sublimetext.com/Sublime Text Build 3211.dmg

Atom is also one of the best IDEs for Mac. It’s open-source, free, and strong, with support for many plug-ins built-in JavaScript. Atom’s source code is publicly available on GitHub because it is open-source software.

Atom is developed and maintained by GitHub.

You may download Atom for Mac from here https://www.macupdate.com/app/mac/53196/atom/download

Xcode is Apple’s official iOS and macOS development environment. It includes support for programming languages such as Swift and Objective-C, as well as a full collection of tools to help you design apps.

Xcode also contains built-in tools including a compiler, debugger, and platform SDKs, allowing you to build apps without relying on third-party resources.

Xcode is created specifically for Mac OS X, therefore it is optimized for that operating system.

Optimized: As previously said, Xcode was built exclusively for Mac OS X, thus it is optimized for it and provides greater performance.

Graphical Debugger: XCode has a graphical debugger that makes debugging a breeze.

Good For Apple’s Native Languages: Apple has developed Xcode so it has some additional features for Apple’s native languages like Swift, Objective-C, etc.

You can download and install Xcode from AppStore and as well from here https://apps.apple.com/us/app/xcode/

PyCharm is a Python IDE that allows you to code in a pleasant editor while still providing capabilities such as Code Lint, Refactoring, Unit Testing, and others. It also has an inbuilt debugger, making it simple to debug your code.

PyCharm for Mac also supports several frameworks, including Django and Flask. PyCharm is developed and maintained by JetBrains.

Good For Python: PyCharm is designed primarily for the Python programming language, therefore it includes some extra capabilities for Python.

You may download PyCharm for Mac from here https://www.jetbrains.com/pycharm/download/download-thanks.html?platform=mac&code=PCC

AppCode is a paid IDE for developing Apple macOS and iOS applications. It provides features like programming language support, a debugger, and code analysis tools.

AppCode also includes a platform SDK that enables you to access the sophisticated functionality of the underlying operating system. It’s very similar to Xcode. It’s developed and maintained by JetBrains.

Native Language Support: Because AppCode is designed for macOS, it provides extensive support for Apple’s native languages such as Swift, Objective-C, and others.

NotePad++ is a free, open-source integrated development environment (IDE) that supports programming in a variety of languages, including C/C++. It also offers tools for code completion and project management. NotePad++ is a text editor that is available for Windows, macOS, and Linux.

It was developed and maintained by a developer named Don Ho.

Lightweight: Notepad++ is a relatively lightweight IDE, which explains why it runs so smoothly.

Huge Language Support: Many languages are supported by Notepad++. It is compatible with nearly 50 programming languages.

How Do You Choose The Best IDE For Mac?

There is no one-size-fits-all answer to this topic, as the choice of an IDE will be heavily influenced by your personal needs and tastes.

If you need performance and smoothness while coding then you should consider using Notepad++ or AppCode.

Why should I use an IDE instead of writing code by hand?

There are numerous reasons why you should use an IDE. Although IDEs allow you to easily create code by hand, they often include tools that can make programming more convenient and efficient.

In this article, we discussed the top seven IDEs for Mac. We’ve already established that there are numerous IDE programmes available for Mac. These IDEs have a number of features that make programming more efficient and convenient.

What do you think which IDE is best for Mac? Let us know in the comments.