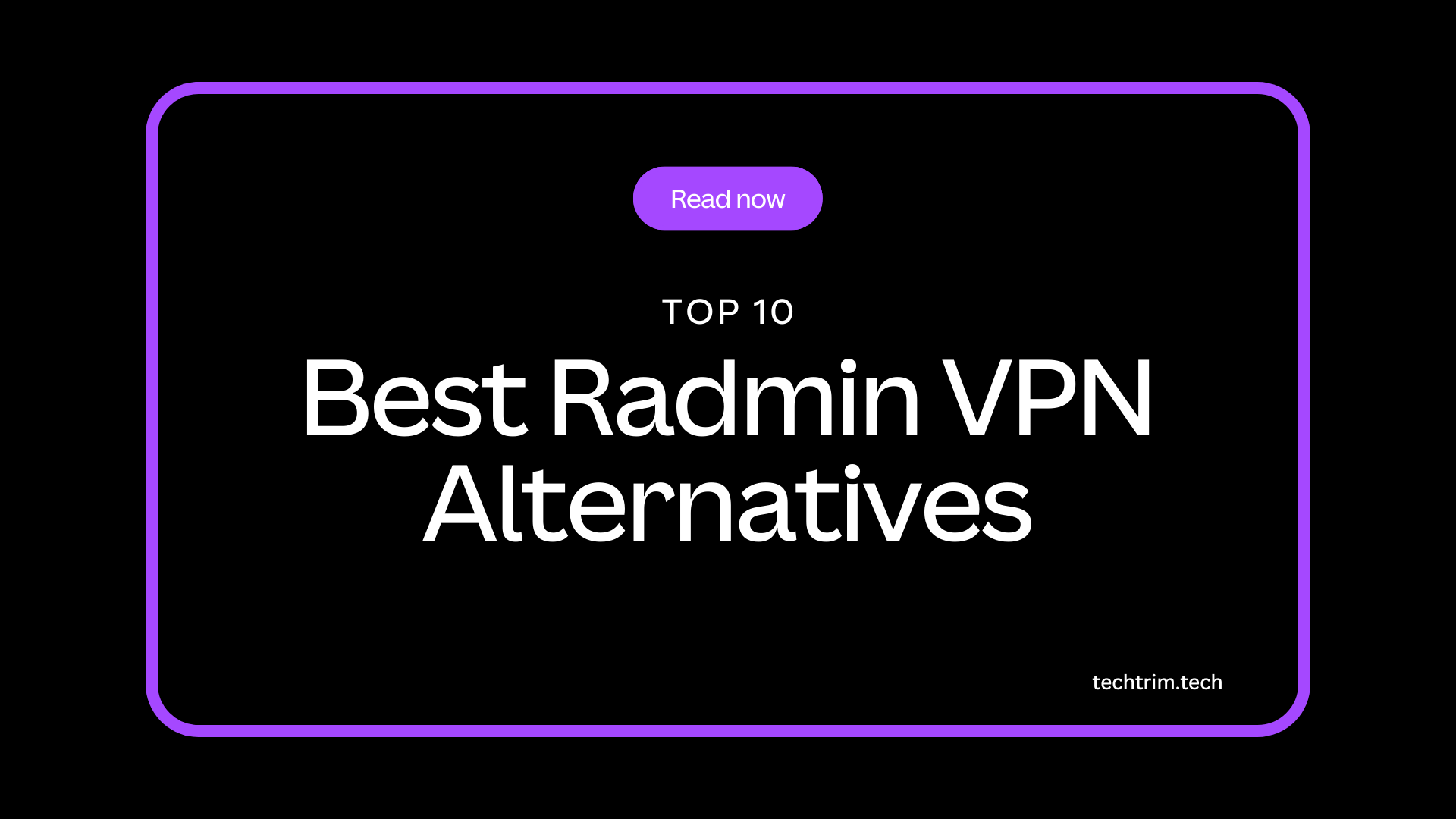 A VPN is one of the most critical cyber security and privacy tools. Did you know 31% of internet users worldwide have used a VPN service? This article will discuss the top 6 Radmin VPN alternatives that provide similar features and functionalities.

So let’s start with what a VPN and Radmin VPN are.

A VPN, or a Virtual Private Network, is a private network that encrypts and tunnels your Internet traffic and requests through a public server allowing you to hide your IP (Internet Protocol) address and ping servers that are blocked in a specific region.

A VPN is a great way to keep your online activity private and secure. One of the drawbacks of using a VPN is speed degradation.

Radmin VPN is a free and easy-to-use software product created by Famatech in 2016. You can use it to create a virtual private network (VPN) for different needs.

Radmin VPN allows you to connect to remote computers behind NAT (Network Address Translation) and Firewalls, making them appear as if they were on the same local network. More than 5 Million people use Radmin VPN.

Radmin VPN is one of the most popular VPN solutions out there. But it’s not the only one with the same features and functionalities. Here are 6 Radmin VPN alternatives that you can use.

OpenVPN is a free and open-source application software that allows you to create secure point-to-point connections and remote access facilities. It uses a custom security protocol that uses SSL/TLS for key exchange.

Furthermore, it was developed by James Yonan on May 13, 2001, and is published under the General Public License (GPL).

Free and open-source: This means that anyone can audit and improve the code, making it more secure.

Cross-platform: OpenVPN is available on different platforms including Windows, Linux, and Mac.

Easy to set up and use: This makes it a good choice for those who are not very technical.

NordVPN is a personal virtual private network service provider. It has desktop applications for Windows, macOS, and Linux, mobile apps for Android and iOS, as well as an application for Android TV. NordVPN also has a browser extension for Chrome and Firefox.

Very secure: NordVPN has a strict no logs policy, meaning your data and activities are never stored or tracked.

It has been praised for its speed, security, and ease of use. The service has been used by political activists and journalists operating in countries with repressive governments, such as China and Iran

Very secure: ExpressVPN has a strict no logs policy, meaning your data and activities are never stored or tracked.

ProtonVPN’s main focus is on security and privacy, and it offers a lot of features to help users protect their online privacy. ProtonVPN uses a variety of security protocols and offers AES-256 encryption

Additionally, ProtonVPN has a strict no-logs policy, which means that it does not track or record any of your online activity.

End-to-end encryption: When you use Proton VPN to browse the web, your Internet connection is encrypted, allowing you to be safe from unwanted attacks.

Very secure: ProtonVPN has a strict no logs policy, meaning your data and activities are never stored or tracked.

NetMotion VPN is a mobile VPN solution that provides a seamless, consistent, and secure user experience across all your devices, including smartphones, tablets, laptops, and desktops. You can stay connected and productive even in the most challenging network environments with this design.

Developers say that NetMotion is the only VPN service developed with mobile users in mind.

Easy to use: NetMotion VPN is easy to install and configure, and users can be up and running in minutes.

Surfshark is a VPN provider located in the Netherlands. It comes with a lot of features which makes it a great choice for those people who are concerned about their online privacy and security.

It’s fast, reliable, and can unblock a variety of streaming services. Plus, it’s one of the most affordable VPNs on the market costing only $2.49 per month.

Very secure: Surfshark has a strict no logs policy, meaning your data and activities are never stored or tracked.

Reliable security: Surfshark VPN comes with several security features like military-grade encryption, a kill switch, and a strict no-logs policy which helps to keep your data safe and secure.

How a VPN Works?

Virtual private networks (VPNs) allow you to send and receive data while remaining anonymous and secure online. A VPN creates a network bridge between the client and the internet. This tunnel prevents anyone on the same network as you from being able to see your data or intercept your traffic.

In this article, I’ve discussed the top 6 Radmin VPN alternatives with the same features and functionalities.

What do you think is the best Radmin VPN alternative and what other VPNs should be on this list? Let us know in the comments.