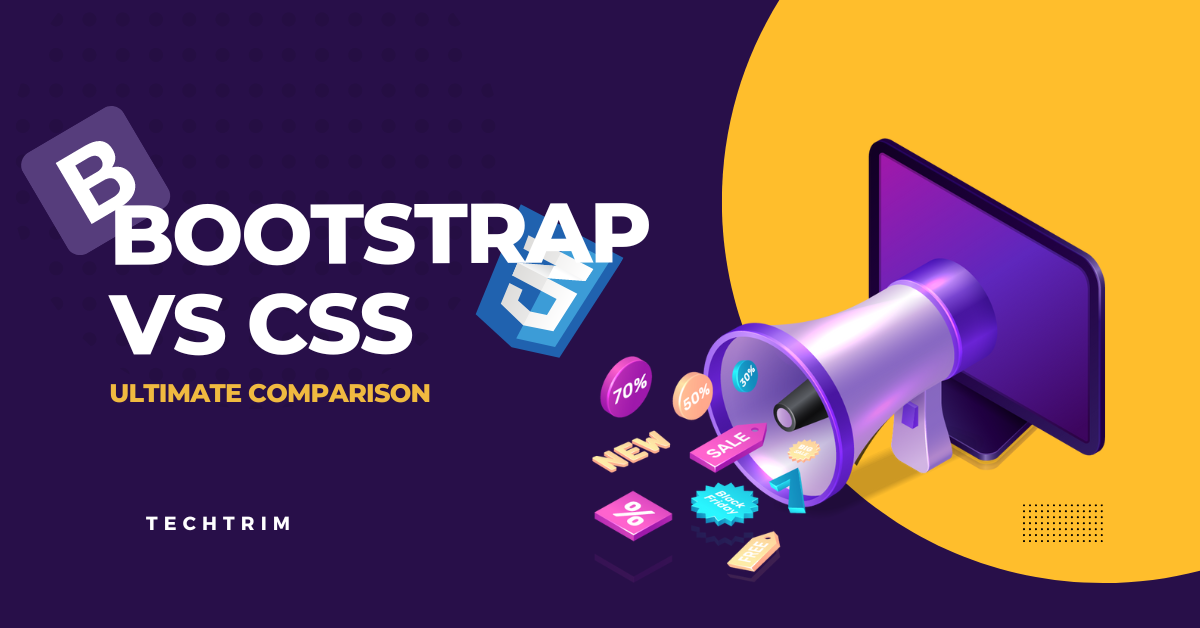 Bootstrap vs CSS: Which is better? It’s a common question and one that can be difficult to answer.

On the one hand, Bootstrap is easier to learn and use. On the other hand, CSS is more versatile and can be used to create more beautiful designs. Which one is better for your site? This answer depends on your needs.

Read on to learn more about each option and decide which one is best for your site.

Without CSS, a web page is not attractive at all. CSS can be applied to any element on the web page. The CSS comes with a simple syntax that is easy to learn and understand.

CSS was originally developed by W3C and released in 1996 as a part of the World Wide Web (www) Consortium’s efforts. It was developed so that the data could be presented beautifully.

Later on, many advancements were made in CSS, and many versions were released, right now, the latest version is CSS3.

Bootstrap is a free, open-source web design framework written in CSS. In Bootstrap some classes are fixed for different elements, which makes it easy for us.

Using Bootstrap we can create a very good-looking website in no time. The only thing that we have to do is to copy and paste classes like this:

Why Compare Bootstrap and CSS?

Bootstrap is a front-end library that was designed to make our work easier. CSS is a web formatting, styling, and design language.

We should compare these two so that we come to know which one is better for a smaller site; what are the pros and cons of both, and which one should a beginner use.

Main Differences Between Bootstrap and CSS

There are many differences between Bootstrap and CSS, but some of the aspects that make the main difference are:

Which Is Faster To Work With?: Bootstrap vs CSS

In its early stages, Bootstrap is way faster to work with. The only thing you need to do is write classes. No need to write CSS by yourself.

But later, working with Bootstrap will become confusing and you’ll feel like a mess.

If you’re working on the front end of a very big website, then CSS will be the faster option. With CSS you can get more control over the design of the website.

Which Is Easier To Use: BootStrap vs CSS

Bootstrap is much easier to use than CSS. In Bootstrap you have been provided with a boilerplate which is customizable. The only thing you have to do is write classes for different elements that you want to use.

While CSS is a little harder to use and you have to write all the code manually.

Which Is Easier To Debug?

CSS is easier to debug than Bootstrap because in CSS you have complete control over the design. While on the other hand, Bootstrap is pre-written code that you can’t change, which makes Bootstrap hard to debug.

But usually, you’ll not get bugs in Bootstrap.

Which One Should You Use?

There is no definitive answer to this question since it depends on your specific needs. If you’re developing a small website like a portfolio then you should use Bootstrap because it will be easy for you and you can develop faster in it.

But if your website is big or more design-oriented then you should use CSS because it gives you more control over the design.

How Important Is CSS?

CSS is quite important for modern websites. CSS makes web pages look attractive, lighter, more modern, and more responsive. Below is an image that shows the same web page with CSS and then without CSS:

Now, on which page would you like to work with the first one or the second one? This shows the importance of CSS on modern websites.

According to research, 97.0% of websites on the internet use CSS.

How To Use Bootstrap?

To use Bootstrap first you will need to import the Bootstrap CSS file. You can do it by pasting this line of code on your web page:

Then you can start using Bootstrap classes on your webpage.

How To Use CSS?

To use CSS, you would need a text editor or an IDE. After opening an IDE you have to create a file ending with extension .css. Then you have to specify the selector it could be a class, id, or an element. Following is a code is written in CSS which shows its syntax.

Bootstrap vs CSS: When To Use Both?

Use Bootstrap when developing:

Use CSS when developing:

There’s no definite answer to this question.

So it depends on your own choice of which medium you want to learn Bootstrap from. But the recommended way is to watch video tutorials.

There are many other web designing frameworks written in CSS. Some of them are the following:

Do You Need To Learn CSS Before Using Bootstrap?

This question is very difficult to answer in one word. But you don’t need to know too much CSS to use Bootstrap; you only need some basic knowledge of classes and IDs.

Even though you don’t need to learn too much CSS for Bootstrap, I would recommend that you learn CSS too. For better results, you should learn CSS too, along with Bootstrap.

Bootstrap is easier to learn than CSS. For using Bootstrap you don’t need to have too much knowledge about CSS.

CSS is quite easier to debug than Bootstrap because you have full control over code and design.

What do you think which one is better in the case of Bootstrap vs CSS? Let us know in the comments.