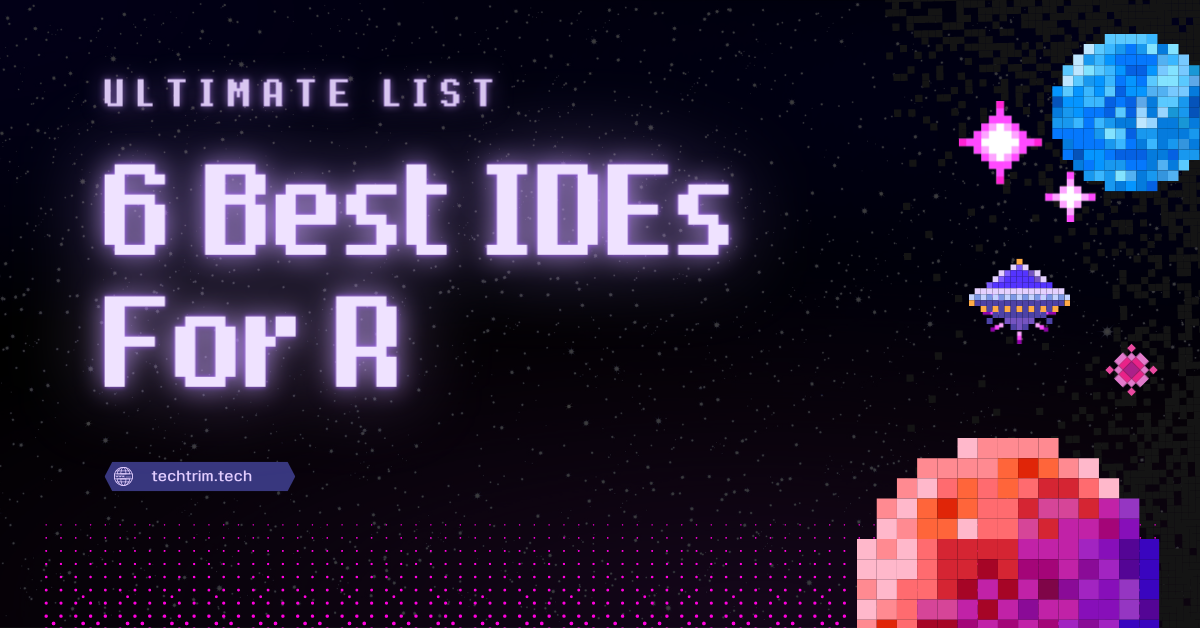 IDE is an essential need for a programmer to work better and efficiently but which IDE for R is the best? Most of the developers use IDE with which they are uncomfortable, resulting in less productivity and time waste.

In this article, I have discussed the best IDE for R programming language and five more code editors that will help you to be more productive.

So, let’s start with what R programming language and IDE are.

Most IDEs also have a built-in way to run and test your code. It can be helpful because you can see your code running and catch any errors while writing it.

There are tons of IDEs around in the market but the best one is Jupyter IDE for R. It has a lot of features that make it easy to use, including syntax highlighting editor, a debugger, and a code completion tool. Plus, it’s free and open source!

Code cells: It allows you to edit and write new code, with full syntax highlighting and tab completion.

Use of equations: In Jupyter you can include easily include equations in your program.

RStudio is a free and open-source IDE developed especially for R programming language. It comes with two formats: RStudio desktop is for normal desktop development while RStudio Server is used for development on a remote server.

Furthermore, it includes features such as syntax highlighting, code completion, and code folding.

Syntax-highlighting: While developing in RStudio, the syntax and keywords are automatically highlighted for a better programming experience.

Visual Studio Code or commonly known as VS Code is one of the powerful IDEs for development in R programming. It’s considered the most productive and user-friendly IDE.

The reason VS Code is so popular and powerful is that it has a huge extensions marketplace that includes tons of free-to-use extensions furthermore, it’s developed and maintained by Microsoft.

Popular: Despite this, the most popular IDE remains Visual Studio Code.

You may download Visual Studio Code from this link.

The Atom IDE is a text editor that’s been designed specifically for developers. It’s open source and it’s available for free on GitHub. The developers have done a great job of making Atom easy to use and customizable. There are a lot of different plugins available, and you can even create your own.

Some of the main features of Atom are:

Auto-Indent: Atom can automatically indent your code for you. This is a great time saver when you are writing code.

Git Integration: Atom comes with built-in integration with Git; it makes it easy for you to push your code to Git.

The Sublime Text IDE is one of the most popular and widely used IDE for R programming language known for its fast performance, powerful features, and ease of use. It was developed by John Skinner on January 18, 2008. Sublime Text also has excellent support for a variety of programming languages which makes it a great choice for both experienced developers and beginners.

AutoComplete: Sublime Text includes a fantastic function called auto-completion, which allows you to write code quicker and with fewer errors.

The Rider IDE is one of the most popular IDEs for R programming language. It provides many features to make programming in R easier, including code completion, refactoring and debugging. Rider includes several features to help you manage your code, such as a class browser and a unit test runner.

Powerful debugger: The debugger in Rider supports both managed and native code, and can debug applications.

Plugins: Rider comes with several plugins for working with specific technologies, such as Xamarin, Unity, and Azure.

Why is an IDE Important?

An IDE (Integrated Development Environment) consists of all the development tools that you need, such as a compiler, terminal, debugger, and interpreter.

The main advantage of using an IDE is that it provides a concise and consistent interface for software development. By using an IDE, developers can easily find the files and code they need, and make changes without having to worry about breaking the code.

In the end, an IDE simply increases your productivity and efficiency.

Overall, there are a variety of code editors and the best IDE for R programming language available on the market. However, it is important to select the one that is best suited for your needs and preferences.

What do you think which IDE for R is best and what other IDEs should be on this list? Let us know in the comments.