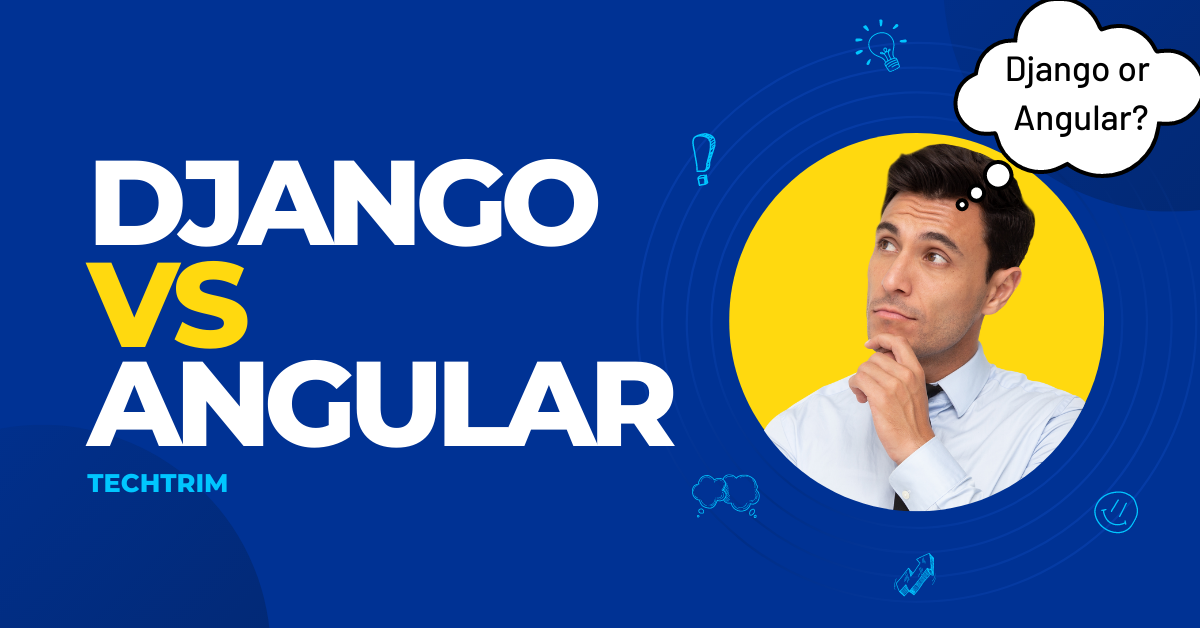 Developers all over the world are adopting AngularJS because of its lightning-fast development and ability to develop highly interactive and user-friendly websites with improved UI.

Which one is the right choice for you? In this article, we will compare Django vs AngularJS and tell some differences so that you know which is better for you and when to use which.

Angular is a free and open-source front-end development framework written in JavaScript. It’s based on the MVC model. Angular is maintained by Google.

Angular is used to make a better UI that doesn’t need to reload the page every time the browser requests the server. It’s quite similar to ReactJS.

Pros of Django and Angular

Cons of Django and Angular

Differences Between Django and Angular

Following are some of the main differences between Django and Angular:

There’s a huge difference in speed between Django and Angular. Angular is faster than Django due to Google V8 Engine.

Django is a very feature-rich web development framework because of Python modules. That’s why many big companies use it.

Following are some of the main features of Django:

Django is written in Python and you can easily use all Python modules in Django.

All Python modules like TensorFlow, Pandas, etc can be used on your website if you use Django.

Django comes with very beginner-friendly documentation. It will guide you from installing Django to creating your first app.

Django is a very scalable and future-proof web development framework. Because of its scalability, many developers use Django for their big projects (websites).

Django has many built-in features for providing security. It prevents many common security threats to your website, for example, CSRF, SQL injection, etc.

Furthermore, Django also hides the source code of your website or makes it unreadable for humans so that no one can copy your front-end code.

A dynamic website needs to have a database. Django provides extensive support for various databases.

Following are some of the main features of Angular:

Due to the Google V8 Engine, Angular is very high-speed and efficient. This engine is written using C++ and it’s used in Google Chrome and Node.

Angular can make very beautiful user interfaces. Most of the Google apps like YouTube, Play Store, Maps, etc, are made using Angular.

The websites of Angular and React don’t refresh, which provides a better UX.

Django is a very powerful and popular web development framework. It’s a very scalable, versatile, and secure framework. That’s the reason many big companies use Django.

Some of the famous companies using Django:

We have discussed earlier that Angular is maintained by Google. That’s why it is a very reliable framework and many companies use it, including most the apps of Google.

Some of the famous companies using Angular:

Stats of Django and Angular

Alternatives of Django and Angular

Like Django and Angular, there are many other frameworks in the market too. If you don’t want to use Django or Angular for any reason then you should have a look at the following popular frameworks:

PHP is one of the best alternatives to Django. They both are mostly compared to each other too.

PHP is a programming language used to write the backends of websites. Famous projects like Wikipedia, WordPress, Yahoo!, etc use PHP.

React is a web design library written in JavaScript. It’s considered the best alternative to Angular. It’s developed and maintained by Meta.

Spring Boot is a Java-based web development framework built on the Spring framework. It can be used as an alternative to Django.

Vue.js is an open-source web designing framework written in JavaScript. It’s another alternative to Angular and it’s mostly used to create single-page applications.

There are many questions asked by beginners. So, we prepared this FAQ list to help you with your project.

Following are some of the FAQs about Django vs Angular:

Which is Better, Django or Angular?

There is no one-word answer to this question. It depends on your needs and which one you want to use.

What is the Main Difference Between Django and Angular?

Which is Faster Django or Angular?

Angular is faster than Django due to Google’s V8 engine, which helps JavaScript to run faster.

In this blog post, we have discussed the differences between Django and Angular.

What do you think which one is better in the case of Django vs Angular? Let us know in the comments.