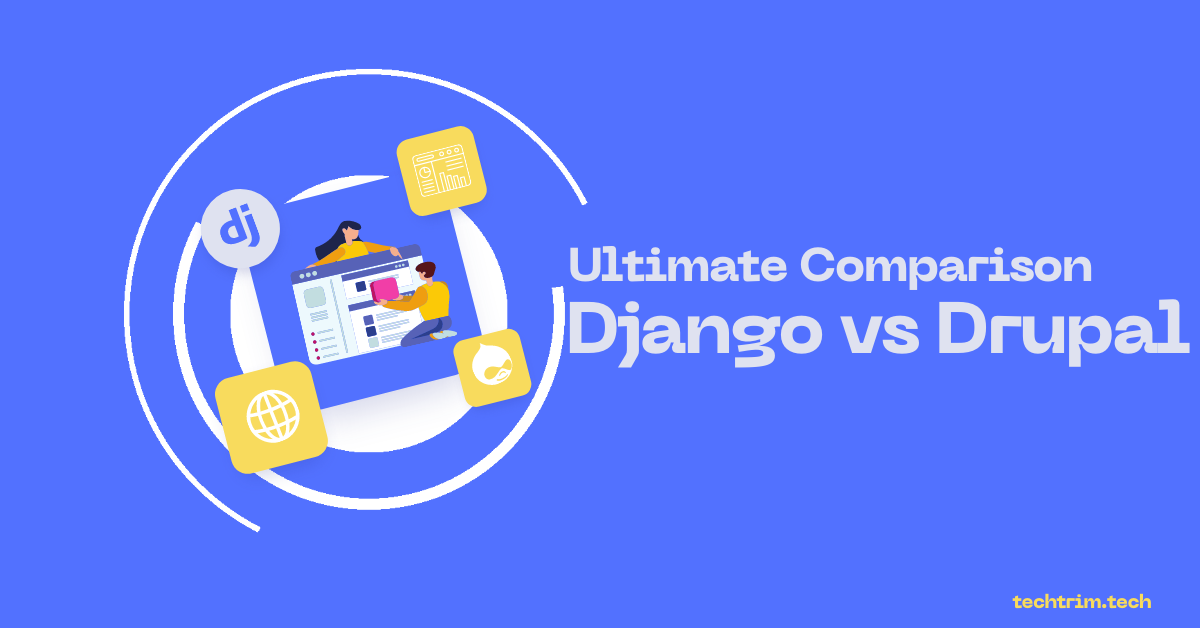 Choosing the right web development technology can be challenging. There are several options available, and it can be hard to decide which one is best for your project.

Did you know over 1 million websites on the internet use Drupal? While only 78 thousand websites use Django.

In this article, we will discuss some top differences between Django and Drupal and you’ll get a clear view of which one to choose for your next project.

We’ll start with what Django and Drupal are.

Django is a robust, free, and open-source web development framework written in Python. The project was developed and released by Adrian Holovaty and Simon Willison on July 21, 2005.

Drupal is a beautiful free, and open-source web CMS written in PHP. It was developed and released by Dries Buytaert on January 15, 2001.

What to Choose for Your Site?

It depends on your needs.

For Django: If you want to build a very scalable project and you have a sound knowledge of Python programming, then you should go with Django.

For Drupal: Now, if you want an easy-to-maintain website with low server cost, then you should use Drupal. It’s easy to learn and use but still provides many powerful features like responsive design, easy content management, and security.

Pros of Django and Drupal

Cons of Django and Drupal

What are the Main Differences Between Django and Drupal

Speed is one of the most important factors in choosing a web development technology. Django is quite faster than Drupal which is written in PHP.

But if you’re using PHP version 8 or higher than Drupal will be 3 times faster than Django. Faster websites are also recommended by Google for better rankings.

Read more about: Differences Between Django and PHP.

Django is way more secure than Drupal. For security in Drupal, you may have to install a security plugin/module.

Drupal is easy to use than Django because everything there is pre-written and ready to use. While in Django you have to style and develop everything on your own.

Django’s community support is better than Drupal’s. Both technologies have their respective communities that offer support and documentation.

Django documentation’s much more comprehensive and beginner-friendly overall thanks to its widespread use and long history. You can find solutions to any problem on forums like StackOverFlow and Quora.

Django has better scalability than Drupal. While both can handle relatively large websites, Django tends to perform better in cases where there are a lot of pages or server requests per minute.

Drupal has an edge when it comes to supporting over 94 different languages. Additionally, because Drupal works with all major browsers, making your site accessible worldwide is simple.

User satisfaction is an essential factor to consider when designing and developing a website.

Django and Drupal are well-known web development platforms because of how simple they are to use, how well they handle user profiles, and how simple it is to access the admin section. Because of this, both offer the highest user satisfaction.

Stats of Django and Drupal

What Are Some Benefits of Using Django Over Drupal?

Some of the benefits of using Django over Drupal include:

Flexibility: Django is highly customizable, allowing users to control almost all aspects of the interface.

Choose The Right One For You

Drupal is a great choice for small websites as it’s easy to learn, use, and manage. However, if you need a fast and scalable website with more features then Django may be the best choice.

After reading this blog you may be able to choose the best web technology for you Django or Drupal.

What do you think which one is better in the case of Django vs Drupal? Let us know in the comments.