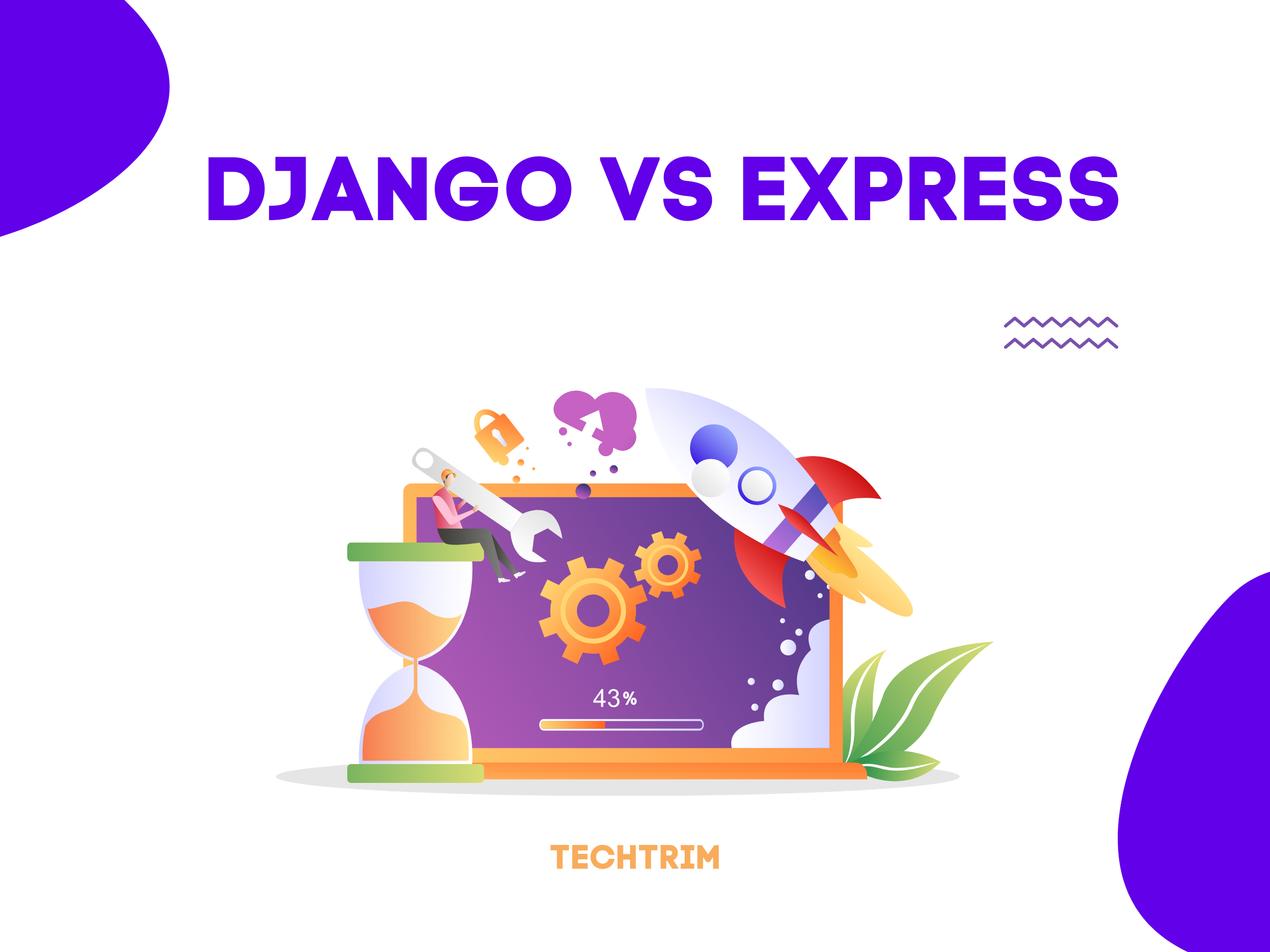 Two of the most popular web development frameworks are Django and Express. However, many people are wondering which is better in the situation of Django vs Express. This post will provide you with a clear image of which one you should use.

Django is the backed language of many large corporations (more about that later).

Express is built with Node.js. It was created to be quick, straightforward, and simple to use. Many features are supported by Express, including routing, sessions, and the Templating Engine (more about that later).

Because Express is developed using JavaScript, it is sometimes referred to as modern technology.

Adrian Holovaty and Simon Willison, two developers, founded Django in 2001. In 2003, they released Django 1.0. Since then, Django has grown to become one of the most popular Python Web frameworks. Since its initial release, Django has grown in popularity.

Django is used in many projects, including many well-known ones.

Express was released on November 16, 2010. It was created by TJ Holowaychuk, and StrongLoop, along with many others. It was designed and used for building interactive web applications and making APIs.

Express had been extremely popular in recent years. Because of its ability to create speedy intelligent web applications on the server side.

Pros of Both: Django vs Express

What Is The Use Of Both: Django vs Express

Django and Express are both extensively used and have their own set of uses. It’s used to create large, complicated, and dynamic web applications. It can even be used to build a simple website.

Meanwhile, Express is used to quickly create web applications, as well as to effortlessly create APIs and Rest APIs. It makes it simple to create single-page and multi-page web apps.

Django is a very popular language that’s why many big companies use it. Following are some of the interesting stats of Django:

Express is another well-known and capable web framework. The following are some of Express’s interesting statistics:

Which Is More Secure?: Django vs Express

Security flaws such as session hijacking and cross-site scripting have been discovered in Express.

The latency of code execution is a critical aspect of a website. If the code run latency is minimal, your website will be faster, and Google prefers faster websites.

Because Express is written in JavaScript and Django in Python, and because JavaScript is much quicker than Python, Express is also faster than Django thanks to the Chrome V8 Engine.

Django and Express are web application frameworks that are extremely scalable. They both feature built-in scaling up and scaling down dependent on demand. Furthermore, they both provide a diverse set of deployment options, including Linux, Mac OS X, and Windows. Finally, they both scale horizontally by utilizing CDNs.

Despite this, Express is far more scalable than Django.

In terms of the amount of code required to build up a simple web application, Django is more complex than Express. However, once installed and configured, creating a Django app is simple.

Express has fewer capabilities, but it is easier to learn because all of its functionalities are accessible from a single area within the project.

For What Both Are Recommended?

Django is a good choice for those looking for a more traditional web framework with more capabilities and possibilities. It is also recommended for large-scale applications.

Famous Companies That Use Django

Django is a popular and strong framework that is utilized by several large companies. The following are some of the largest companies that use Django.

Famous Companies That Use Express

Express is a current solution for developing REST APIs, which is why many huge companies use it. The following are some of the huge companies that use Express.

Django uses a Model Template View(MTV) architecture. A Django MTV model template is a reusable piece of code that assists you in creating models in Django for use with the MTV project management system.

This architecture has the advantage of allowing separate teams to work on different areas of an application without interfering with each other. One downside is that changing or overriding a view might be difficult.

Django and Express are both very popular and frequently used frameworks. Both have a large community following for a variety of issues, errors, and bugs. Django and Express documentation is very informative and simple to understand for beginners.

Is It Easy To Find Express Developers?

Because Express is a popular web app framework, there are numerous Express developers. There are also many free online resources for learning Express, which is why so many people have learned it.

Career Opportunities of Django and Express

Django and Express are two prominent web development frameworks that can be utilized for a range of jobs.

You could also work as a freelancer to create websites in Django or Express. Both frameworks are also excellent choices if you want to build your web application from scratch.

Is Node.js Better Than Django?

Django versus Node.js is all about the developer’s experience and preference, while the latter is for experienced developers who need to create actual websites, or highly scalable applications.

You can use Django if your developers are good at Python.

If you need a high-performance runtime environment, Node.js is better to use. It’s also useful if you wish to use JavaScript consistently throughout your web project.

Complexity is also a major factor when selecting a framework. Django and Express are not very complex frameworks. Django has a beautiful, well-organized design that makes it simple to create web applications with it.

Express is a high-level, open-source Node.JS web development framework that makes it simple and enjoyable to create quick and scalable Web Applications.

However, when we compare the two head-to-head, Django is more complex than Express.

How to Setup Django and Express?

Setting up a framework or a language is very important and the very first step for development. Django is pretty easier to set up than the Express framework because of the pip package manager in Python.

On Windows, you can download and install Python from this link https://python.org/downloads/.After installing Python and pip you can install Django by running this command.

After installing Node.js create a new directory using the following command in which you are going to install your Express app:

Now, to create a package.json file use the following command:

After creating package.json enter the name of the main file to any desired name like app.js. Now to install Express in myExpressApp directory use the following command:

Django and Express are both excellent frameworks. It is completely up to you which framework you wish to use. If you know Python or want to use Python libraries then you can use Django.

However, if you want to create APIs and rest APIs, or if you want JavaScript’s speed and modern capabilities, you can use Express.

What do you think is better in the case of Django vs Express? Let us know in the comments.