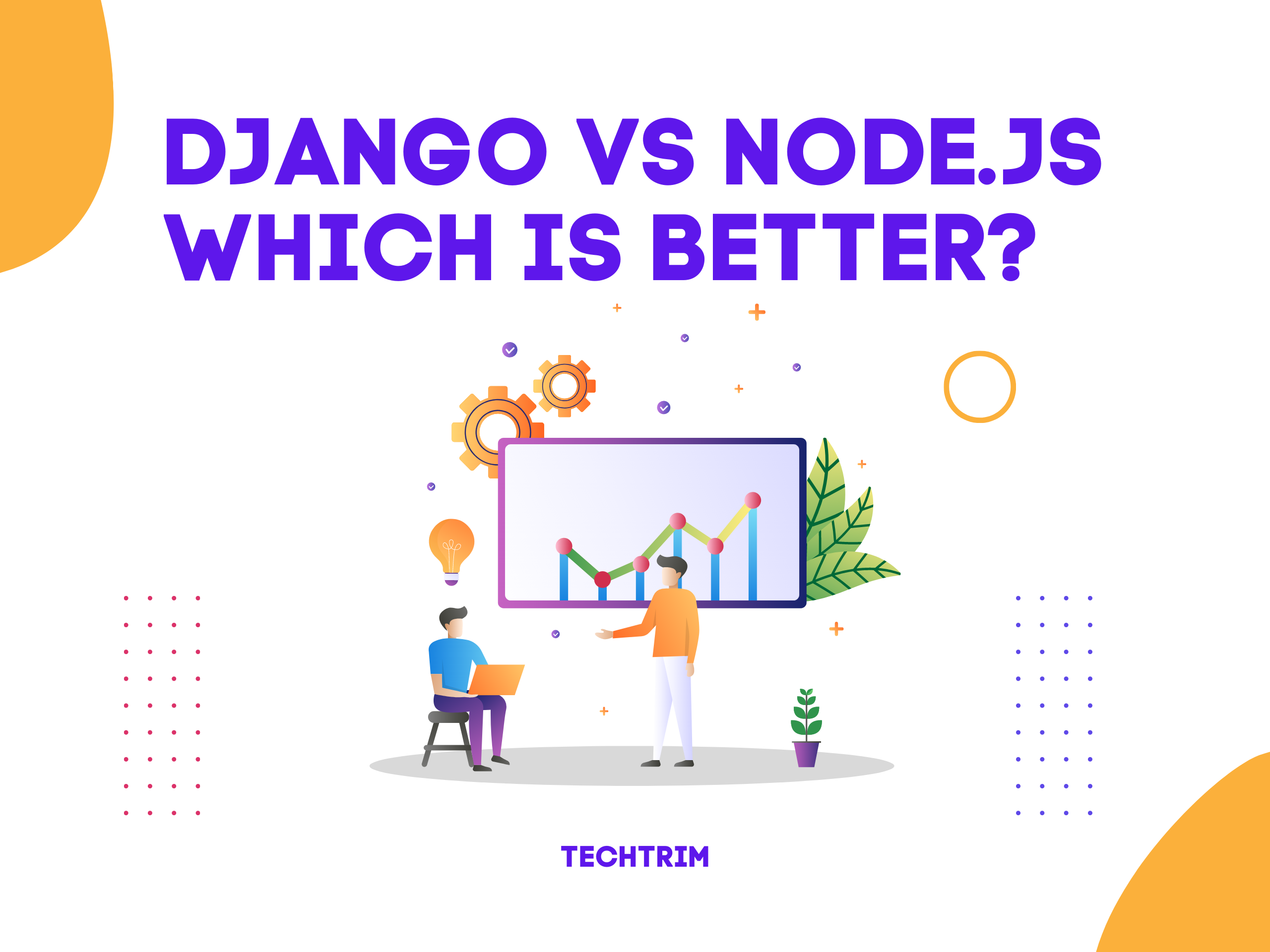 Django and Node.js are two of the most popular, widely used, and powerful web development frameworks available. This article will give you a clear picture of which is better in the case of Django vs Node.js, what their features are, their pros and cons, and more.

What Is A Web Development Framework

Web development frameworks are tools that assist developers in the creation of web applications with specific structures in mind. These frameworks offer templates, tools, and best practices to make web development more accessible and simple.

A framework is a set of instructions for completing a task or series of tasks (think of it like a recipe). A web development framework is intended to assist developers by providing instructions on how to construct their websites. This includes the overall design, the programming language used, and any libraries or packages that can be used in your application.

Django is a Python-based web framework that is free and open-source. Django is intended to be an ideal framework for rapid development and easy deployment, but it is also a full-featured framework capable of powering production-level applications.

Node.js is a runtime environment and library for running JavaScript applications outside of a web browser. Node.js uses an event-driven, non-blocking I/O model that makes it lightweight and efficient. It is used by some of the biggest companies in the world, such as LinkedIn, Walmart, and Netflix.

Node.js is open source and can be run on Mac, Windows, and Linux operating systems. It has a large community of developers who contribute to the project and offer support. Node.js uses an Asynchronous Programming Model.

Adrian Holovaty and Simon Willison, two developers, founded Django in 2001. Django 1.0 was released in 2003. Since then, Django has grown to become one of the most popular Python web development frameworks. Since its initial release, Django has grown in popularity. Django is used in thousands of projects, including many well-known ones.

Node.js was created by Ryan Dahl in 2009. The early development of Node.js took place in the summer of 2009 in a two-week sprint with Dahl, Yehuda Katz, and Tj Holowaychuk.

Pros and Cons of Both: Django vs Node.js

– Django is easier to use.

– Django is more secure than Node.js.

– Django can use several python libraries.

– Django is easy to extend.

– Django is good for deployment.

– Django is more compatible with other programming languages.

– Django has a large number of libraries to choose from.

– Django is not suitable for small projects.

– Django is slower than Node.js.

– Node.js enables developers to use JavaScript on both the server and the client-side.

– Node.js is faster than Django because of Google’s V8 Engine.

– Node.js is more lightweight than Django.

– Node.js includes a module system that makes it simple to share code between Node.js programs.

– Node.js is difficult to debug.

– Node.js only runs one process per CPU core.

Node.js is based on JavaScript syntax that refines jobs with little CPU consumption prices. As you utilize Node.js for the backend runtime environment, CPU-bound jobs appear a great deal regularly. The framework of Node.js is occasionally irregular with high-load-CPU procedures, which limits programmers as well as reduces performance.

The core performance has been attempted and also shown by the large development community, so there are barely any performance problems. Less prominent NPM modules are badly constructed, have pests, and do not have documentation. Node.js is open-source, so its updates do not undertake strict quality control, favoring a quantity-over-quality approach.

Node.js utilizes callbacks to track finished jobs. As task scales and also the variety of active procedures expands, callbacks increase. At some point, programmers take the chance of obtaining lost in callbacks and also miss out on critical bugs or technical financial obligations.

What Are The Benefits Of Using Django?

Django is a web application framework that allows you to quickly and easily create web applications. Django adheres to the Model-View-Controller (MVC) architectural pattern, which divides the application into three distinct components: the model, the view, and the controller. This separation of concerns aids in the organization and management of your code.

Some of the benefits of using Django include:

– Django is a very user-friendly framework. It is easy to learn and use, even for beginners.

– Django comes with a lot of features pre-installed, such as templates, ORM, and authentication. This saves developers time and hassle when starting a new project.

Additionally, Django is well-supported by the Django community, which includes a large number of developers who are happy to help. In comparison to other frameworks, Django’s documentation is well presented.

Node.js also has large community support. Compared to Django, there are many online tutorials related to Node.js on the web, and more companies use Node as their backend web technology. Node.js documentation is also very well presented and useful for getting started.

What Is The Use Of Both? Django vs Node.js

To create a project, you can use both Django and Node.js. Both can be used to build a simple website.

Django was created with Python, a general-purpose programming language, and Node.js. is written in JavaScript.

In terms of performance, JavaScript outperforms Python. As a result, Node.js is faster than Django in terms of code execution speed.

Advantages and Disadvantages: Django vs Node.js

There are numerous advantages to using Django for web development. Among the most notable advantages are:

Django is a very powerful and popular web development framework but still, it has some disadvantages. Some of which include:

Node.js is a very powerful and efficient framework but still, it has some disadvantages. Some of which include:

The syntax is the rule that you must follow when writing code, and if you do not follow that rule, you will receive an error.

One significant distinction between Django and Node.js is their syntax. The syntax of Node.js is much longer than that of Django. Node.js requires more lines of code to accomplish the same task that Django can in a few lines.

The Django and Node.js code for displaying “Hello, World!” is shown below.

Both frameworks are very simple to set up. However, Django is much easier to install than Node.js.

Django can be easily installed with a single command, as shown below.

It takes a long time to install Node.js. First, download the Node.js installer from its website. Then you must download and install NPM from its official website. Then, open the terminal and type this command.

Famous Websites Which Use Django

Django is a powerful and dependable web development framework. This is why many well-known websites use Django as their backend language. Among those websites are

Famous Websites Which Use Node.js

Django is a popular Python-based web development framework for building websites and applications. Before learning Django, you should have a basic understanding of Python. You do not need to be an advanced Python developer.

It has a lot of requirements and it is important to know what they are before you start learning Django.

Some of the requirements include:

Node.js is a server-side runtime environment for JavaScript. Node.js is a powerful and easy-to-learn framework for web development with a plethora of libraries for developing web applications, APIs, and other types of applications.

Node.js programming is not for everyone. If you want to become a Node developer, you should have some programming experience first because it requires knowledge of JavaScript and familiarity with asynchronous programming patterns, among other things.

Some other requirements for learning Node.js include

Django is a web framework designed to work with Python, “a programming language that allows you to work more quickly and effectively integrate your systems.” It has many limitations, such as the fact that it cannot be used for real-time web applications and that its templates are not suitable for larger projects.

Although Node.js is a fantastic framework with a lot of functionality, it is not without limitations. One of the most significant limitations of Node.js is that it is a JavaScript-based framework, which means you will need JavaScript skills to build your application.

Because Node.js uses an Asynchronous Programming Model, the code is difficult to maintain and extend.

Django is a free and open-source Python-based web framework. Django is designed to be a quick development and deployment framework, but it is also a full-featured framework capable of powering production-level applications.

Node.js is a runtime environment and framework that allows JavaScript programs to be executed outside of a web browser. Node.js is lightweight and efficient because it employs an event-driven, non-blocking I/O paradigm. It is utilized by some of the world’s largest corporations, including LinkedIn, Walmart, and Netflix.

Both Django and Node.js have their pros and cons it depends on you what works out best for you.

So what do you think is better in the case of Django vs Node.js? Let us know in the comments.