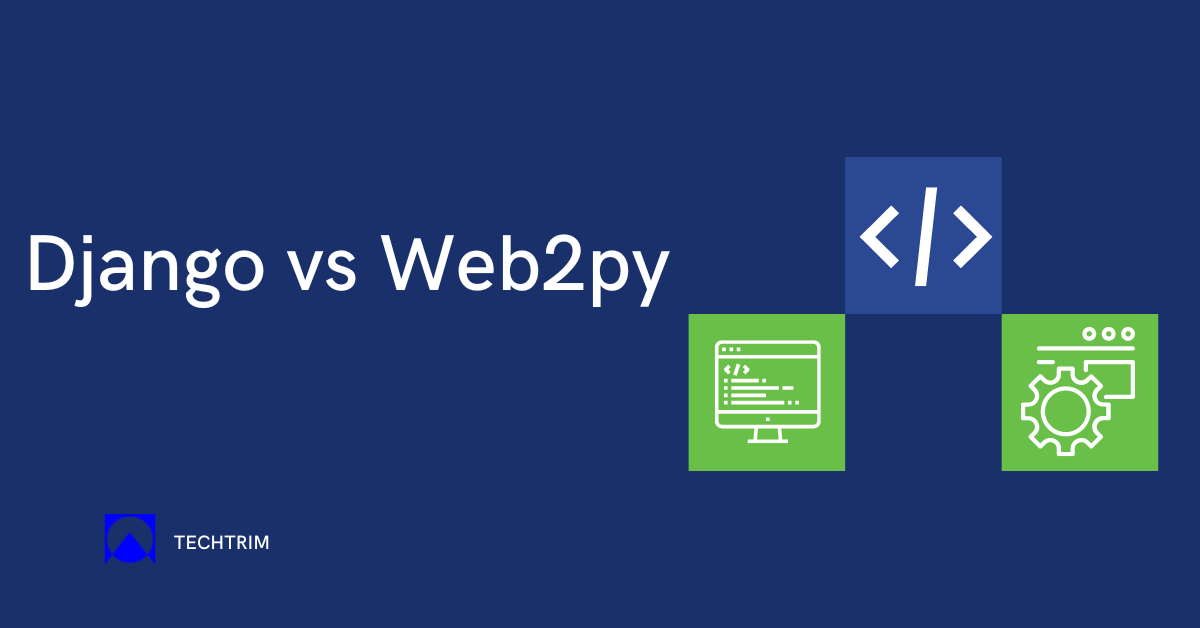 More than one hundred thousand websites on the internet use Django. There’s confusion about which one is better in the case of Django vs Web2py.

Contents hide
1 What’s Django?
2 What’s Web2py?
3 Django vs Web2py: Comparison Table
4 What are the Differences Between Django and Web2py?
4.1 1. Ease of Use
4.2 2. Community Support
4.3 3. Speed Difference
4.4 4. Built-in Features
4.5 5. Security
5 Django vs Web2py: Infographics Comparison
6 Limitations of Django
6.1 Not Suited for Small Projects
6.2 Monolithic Framework
6.3 Not Thread Safe
7 Limitations of Web2py
7.1 Not Beginner-Friendly Documentation
7.2 No Python 3 Support
8 Stats of Django and Web2py
9 Which one to use?: Django vs Web2py
10 Conclusion

Django is a very popular, free, and open-source web development framework written in Python. It’s used to make the backend of the websites easily and quickly due to its features.

Web2py is another powerful, free, and open-source web development framework written in Python. It was inspired by Ruby on Rails and is quite similar to Django due to its ease of use and features.

What are the Differences Between Django and Web2py?

Web2py is easier to use than Django because of its less complex file structure and user-friendly development environment. Furthermore, Web2py doesn’t come with any project-level configuration files.

The community support of Django is very huge than Web2py. You can find answers to almost every question on forums like StackOverFlow and Quora. Documentation of Django is very easy to understand and beginner friendly.

Speed is one of the most important aspects when choosing a web development framework. Faster websites are also recommended by Google.

This is hard to consider which one is faster in the case of Django vs Web2py. But In general, Django is considered faster than Web2py because of its features and huge request handling.

Django comes with a lot more features than Web2py like a built-in database and an admin dashboard that can be used to create, read, update, and delete objects in the database.

While Web2py doesn’t have any of these built-in features.

Despite being a rather robust framework, Django has certain limitations. The following are some Django limitations that can make it less effective than Web2py.

Not Suited for Small Projects

Django is a monolithic framework which means that it is not modular, and all of its components are tightly coupled.

It’s not thread-safe which means that if you want to run Django on a multi-threaded server, you will need to take care of synchronizing access to the database and other shared resources.

Web2py is quite powerful but still, it has some limitations and drawbacks which can be a reason that many developers don’t use it. Following are some of the limitations of Web2py.

One of the most significant drawbacks of Web2py is its not beginner-friendly documentation. While the Web2py website provides some documentation, it is not nearly enough to help developers who are new to the framework.

Web2py doesn’t support Python 3 which is the new version of Python. It means you can’t use the Web2py application if you have Python 3 installed.

Stats of Django and Web2py

Which one to use?: Django vs Web2py

There’s no definite answer to this question. It depends on your needs which one is better for you and which one to use. If you want a complete framework that includes everything you need to create a website or application, then Django is the best choice.

If you need a minimal framework that is easy to use then you should go with Web2py.

In conclusion, while both Django and Web2py are great web development frameworks, there are some key differences between the two. Django is more suited for larger projects with more complex requirements while Web2py is recommended for small websites with limited resources.

Furthermore, we’ve also discussed five differences between Django and Web2py that will give you a clear view that which one is better for you.

What do you think which framework is better in the case of Django vs Web2py? Let us know in the comments.