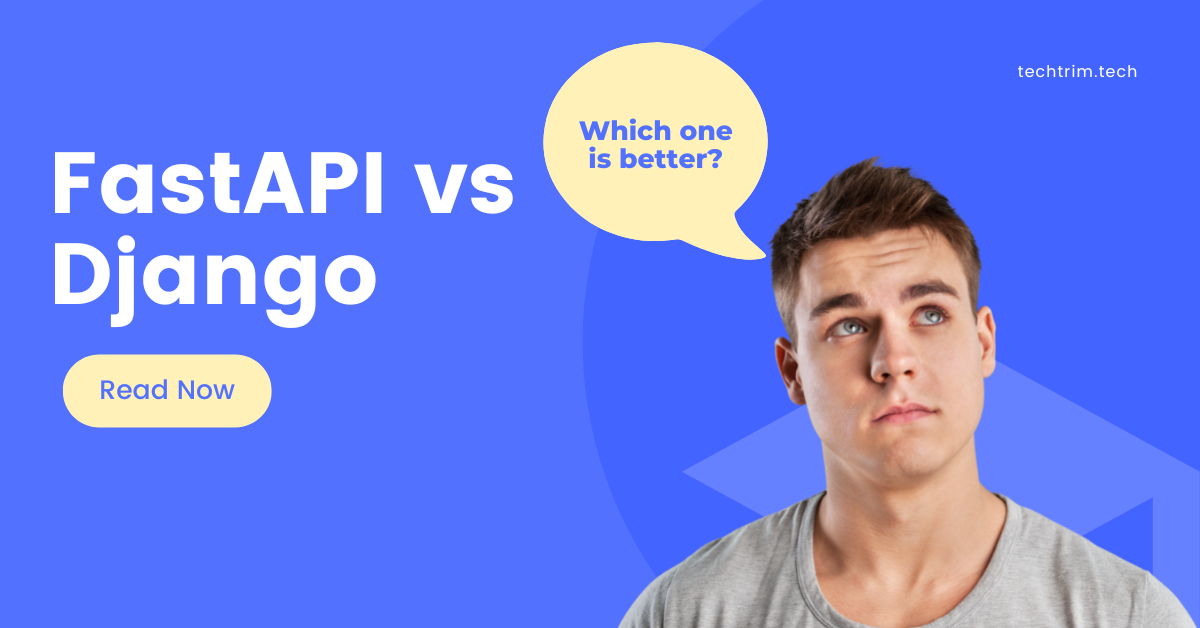 It’s a very hot topic, which one is better in the case of FastAPI vs Django. Do you know more than 80,000 websites on the internet use Django?

Python is a versatile programming language that has gained popularity in recent years for its use in data science, machine learning, web development, and API development.

FastAPI is a free and open-source web development framework written in Python that enables developers to create high-performance web applications and RESTful APIs. t is built on top of Starlette, which is a lightweight ASGI framework.

What are the Top 5 Differences Between FastAPI and Django

Even though FastAPI and Django are written in Python, still FastAPI is faster than Django because it’s modern and new. It also increases your website’s speed.

Django is quite easy to use than FastAPI because of its well-organized codebase, versatility, and easy-to-understand file structure.

Django uses the MVC architecture while FastAPI is based on the ASGI framework and Python-type hints.

The community support for Django is more huge than FastAPI. You can find answers to almost every question on different forums like Quora, StackOverFlow, etc.

FastAPI has a growing community of users and developers. The FastAPI website includes documentation and a community forum.

Django is much more secure than FastAPI because it comes with a built-in security system and protection from CSRF, SQL injection, and XSS (Cross-site Scripting). But still, FastAPI is also very secure in comparison to other web technologies like Flask or PHP.

Advantages and Disadvantages of Using FastAPI

Advantages and Disadvantages of Using Django

Use Cases of FastAPI and Django

Use cases of FastAPI:

FastAPI is used to develop APIs that are fast, scalable, reliable, and maintainable. Secondly, it’s also used to make OpenAPI 3.0 schemas and the asynchronous interfaces.

Use cases of Django:

Django is used to develop bigger projects quickly and easily, or create database-driven websites. Furthermore, it can be used to create a CMS (Content Management System) and much more.

Popular Libraries for FastAPI and Django

Libraries are the pre-written code that a developer can import into his project and start using without caring about writing it from scratch.

Some of the most popular libraries and modules for Django are Django Rest Framework, Django Celery, and Django Channels.

Following are some of the interesting stats of FastAPI.

Following are some of the interesting stats of Django.

FastAPI and Django are very popular and powerful, that’s why most famous companies use them.

Which One to Choose?: FastAPI vs Django

There’s no definite answer to this question. It depends on your needs, which one is best for you. For instance, if you’re developing a big website with a ton of backend functionalities, then go with Django because of its scalability.

But if you want to develop APIs that are fast or automatic documentation with pydantic, use the pydantic model, then go with FastAPI as it’s made specifically for these purposes.

FastAPI and Django are two of the best Python frameworks for web and API development. There are a few key factors to consider when deciding whether to use FastAPI or Django for your web development needs.

In this article, we have discussed the top 5 differences between FastAPI and Django to help you decide which one is better for you.

What do you think which one is better in the case of FastAPI and Django? Let us know in the comments.