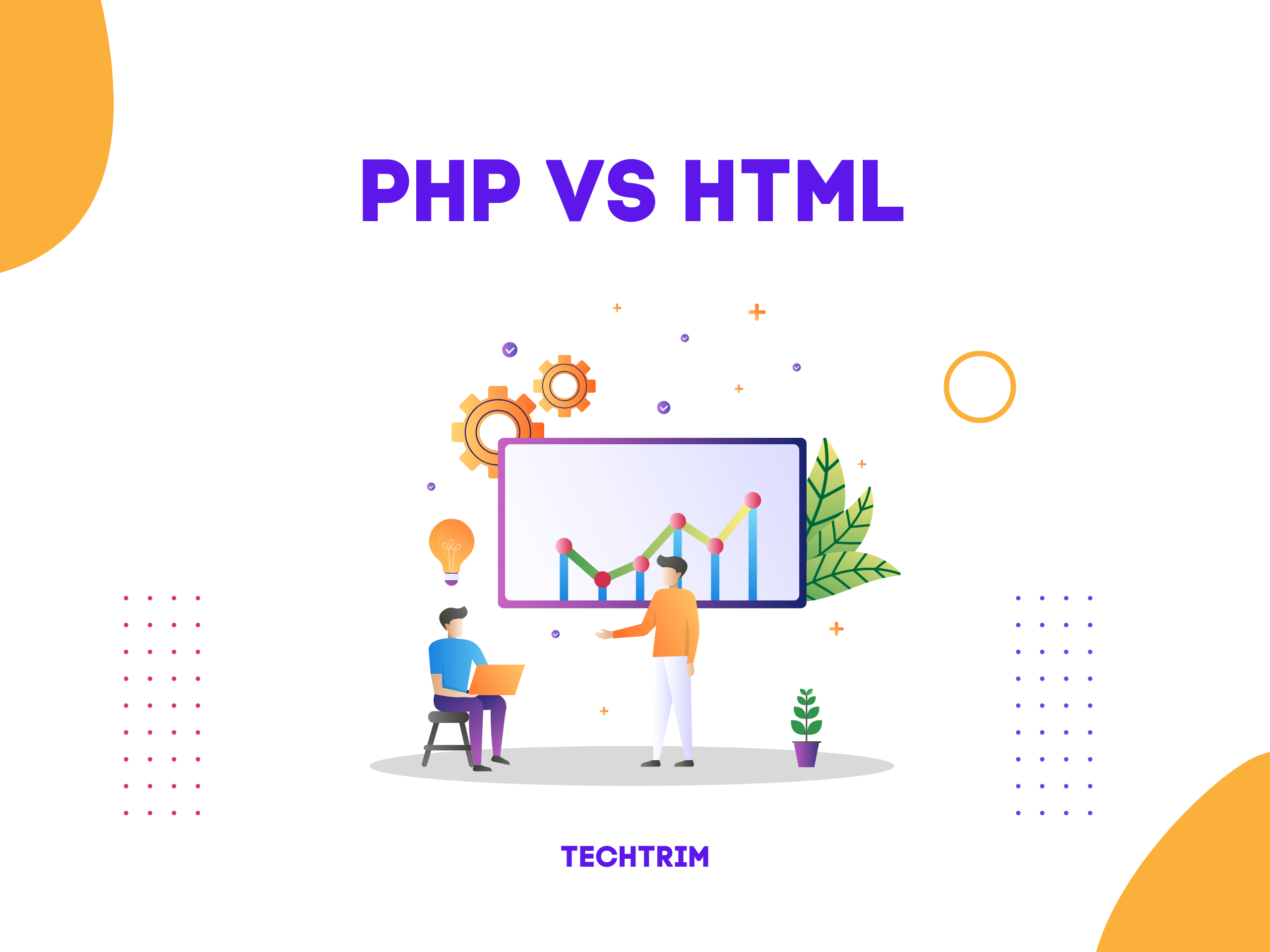 PHP and HTML are both widely used web development languages. PHP is a scripting and programming language, whereas HTML is a markup language. In this post, you will learn the differences between PHP vs HTML, as well as when to use which.

PHP is a popular open-source server-side scripting language that is simple to learn and powerful to use.

It is used to build everything from simple Web sites and applications to complex e-commerce and content management systems(CMS). PHP makes it simple to communicate with databases (through SQL) to access data or perform operations.

HTML is a markup language that helps in the structure and presentation of content on a web page. You can use it to make lists, tables, headings, and other basic elements. HTML can also be used to add formatting elements such as colors and fonts.

HTML stands for HyperText Markup Language. Sir Tim Berners-Lee created HTML, which was released in 1993. After that, various versions of HTML were released, the most popular of which was HTML 4.01.

HTML 5 is used by the majority of modern websites and has become a standard. W3 created and launched HTML 5 in 2014.

The structure and content of a website are created using a markup language. Designers and developers can use markup languages to determine how web pages and data should look.

PHP was first released in 1995. It was created by Rasmus Lerdorf who also created Perl. It is a free, open-source scripting language designed for the Web. PHP is a very popular programming language.

Why Compare Both?: PHP vs HTML

One significant difference between PHP and HTML is that HTML is used to create structured documents, whereas PHP is more typically utilized to build dynamic web pages. Furthermore, PHP provides more flexibility in terms of coding structure than HTML.

What Are The Pros And Cons Of Both?

Both PHP and HTML are widely used languages for web development. Following are some of the pros and cons of PHP and HTML.

– PHP is not hard to learn.

– PHP is very good for deployment.

– PHP is more compatible with other programming languages.

– PHP is good for back-end programming.

– HTML is very easy to learn.

– HTML has huge support in every browser.

– HTML can be used with other languages like JavaScript, CSS, PHP, etc.

Because PHP and HTML are both relatively simple to learn and use, the syntax of both is very simple. The following is an example of PHP and HTML code that displays “Hello, World!” on the screen.

Famous Websites That Use PHP

PHP is widely used for web development and backend development. Because PHP is both strong and simple to use, many companies depend entirely on it as their backend language. The following are some of the most popular PHP-powered websites.

Famous Websites That Use HTML

PHP is one of the most commonly used languages on the internet and is installed on millions of websites. Despite its widespread use, many developers feel that PHP has become outdated and no longer holds the same relevance as newer languages like Python or Ruby on Rails.

But that’s not true at all still, PHP is very popular and one of the easiest languages to learn. That’s why many of the popular websites like Wikipedia, WordPress, Tumblr, etc use PHP.

How Many Websites Use PHP?

As we have discussed earlier that WordPress is made using PHP. And according to a study, 43% of the websites on the internet use WordPress which technically means that they use PHP.

When To Use PHP?

When developing your back-end, you should consider choosing PHP because it is easier to learn and use than other backend languages and frameworks such as Django, Flask, Node.js, and so on.

When To Use HTML?

When developing your front-end, you will use HTML. You can use HTML to structure your web page or CSS to make it seem beautiful.

There is no other option but to use HTML, but if you think you can use WordPress, then WordPress or any other CMS code is in HTML, therefore you’re using HTML directly or indirectly.

Which Is Easy To Learn?: PHP vs HTML

HTML is easier to learn than PHP, even if you make a few spelling or tag mistakes that don’t matter much. HTML instantly corrects minor errors, making it extremely simple to learn.

However, PHP is a programming language, and unfortunately, PHP is case-sensitive, which means it will not accept any minor or fatal errors, making it tough to learn for beginners.

PHP has evolved over the years, but it still has limitations. Designers are just getting around to utilizing new features that PHP provides. That being said, PHP is a very powerful language for developers to use.

One of the limitations of PHP is that it does not have a lot of built-in functions and libraries for designers and developers to use when they need them. For example, a designer might need a library to help them create a widget or interactive map on their site.

PHP is not the best language if you want to do any sort of server-side programming because it requires you have your server run scripts. To run scripts from your computer, you will need an application installed on your computer that can handle these types of tasks.

Another limitation of HTML is the difficulty in providing dynamic content.

PHP is extremely powerful, but it is also very slow, with a very long code execution time. It causes your website to load slowly, which is not a good sign because Google evaluates website performance when ranking it. If performance is critical, you can use other frameworks like Django, Node.js, and others.

HTML is a markup language, hence its speed doesn’t matter. Or you might claim HTML is very fast and it isn’t much you can do about it. The speed of HTML can sometimes be affected by the back-end languages.

Question Related To PHP vs HTML

Can We Use PHP With HTML?

This should be unsurprising that PHP can be used with HTML. A simple PHP script(code) that prints “Hello, World!” is shown below.

How Is PHP Related To HTML?

At first, websites were simply texted files containing content and some markup to change the design and link to other pages.

These text files were not dynamic. You have to update the text file if you wanted to show something else in the visitor’s browser.

It was not able to create interactive sites, such as search engines, or display database records. As a result, computer-generated imagery (CGI) was created. It is a method of routing the output of a software program to the visitor’s browser. Because the browser expects HTML, the software must also output HTML. Perl was a popular programming language for creating such applications. It was tough to write them since they were so low level.

Then came PHP (in 1994). The files are standard HTML files, however, some parts have been replaced with PHP statements. The underlying code may use dynamic content to replace these statements. This could be the outcome of a calculation, the output of a database, or anything else.

It began as a very simple replace token’ language. However, it has since evolved into a very versatile programming language.

So here’s how it relates: PHP runs on a web server and can generate HTML, allowing it to be used to develop dynamic web pages and web applications.

Is HTML A Programming Language?

PHP and HTML both are very widely used languages for web development. They have their functionalities like PHP is used for the back-end while HTML is used for the front-end. There are also many other differences between PHP and HTML.

Both languages have their own pros and cons and you should use these languages accordingly. You can use PHP because it’s very easy to learn and use than other languages like Django, etc.

What do you think which one is better in the case of PHP vs HTML? Let us know in the comments.