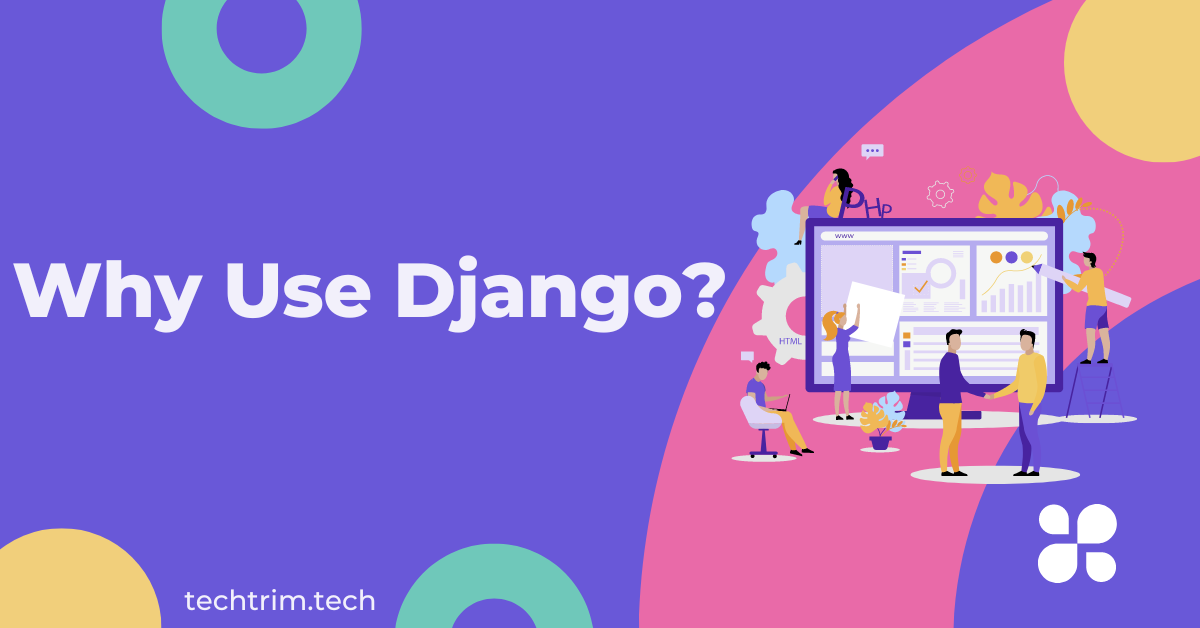 Django is a good option if you want a strong web framework that’s also simple to use. It has a vast and active community of web developers who use it.

In this post, we’ll give you 10 reasons why you should use Django for your next project. So read on and find out why Django is such a robust web development framework.

Django is a free and open-source backend web development framework written in Python. Django is a widely used and powerful framework. It was developed and released, by Adrian Holovaty and Simon Willison on July 21, 2005.

Top 10 Reasons To Why Use Django?

Django is very popular and powerful, hence there are many reasons you should use Django for your next project. Whether you are building a photo editor app, blog, or ecommerce store, you can use Django.

The following are the top 10 reasons why use Django:

Django also hides the frontend source code of your website so that no one can even copy your frontend code.

Django is very fast compared to other programming languages like PHP and Flask. Even though Django is made in Python but it’s still faster and more efficient for development.

Fast websites are also recommended by Google for better ranking.

3. Easy To Learn and Use

Python and Django both are very easy to learn and use. Python is also said to be the simplest programming language.

Django follows MVT (Model View Template) architecture which makes it a little harder to use but with little effort, you can do it easily.

The database is a very important aspect of a dynamic website. In some frameworks, creating and connecting to the database is very hard. But that’s not the case with Django.

Django has a built-in database called PostgreSQL which is quite a fast and popular database.

Django is a cross-platform web development framework. The websites created in Django will work the same on Windows, Linux, and Mac.

As Django is a very popular web development framework it has very huge community support. There’s a chance that the solution to your problem is already there on the internet.

Furthermore, the documentation of Django is friendly as well which also covers several common problems and mistakes.

Django comes with very easy-to-understand and beginner-friendly documentation. It guides you from installing Django to creating your first app.

Django is a very scalable and future-proof web development framework. Because of its scalability, many developers use Django for their big projects (websites).

There’s a built-in admin dashboard in Django. The admin is enabled in the star project’s default project template.

Django admin dashboard can be used to add, edit, and delete objects from the database of your website easily.

10 Reasons Why Use Django: Infographic

Famous Companies That Use Django

Django is a very powerful and popular web development framework. That’s the reason many popular companies use it.

Following are some of the famous companies that use Django:

Instagram is an American-based photo and video sharing platform with over 1 billion monthly active users. It also uses Django as its backend technology.

Pinterest is another image-sharing platform that follows a board, and-pins pattern for sharing images, GIFs, and videos. Thanks to the Django web development framework, it now has over 433 million monthly users.

The creator of the famous web browser Firefox, Mozilla also uses Django for their backend. They switched from PHP to Django because of its flexibility, and power.

Dropbox is an American file hosting platform with over 700 million registered users. It also uses Django for its backend management of data and synchronization.

NASA uses Django for the functional elements for reliability. It’s able to handle huge traffic of 2 million views per month.

Django is a very popular language that’s why many big companies use it. Following are some of the interesting stats of Django:

Django is a web framework designed to work with Python, “a programming language that lets you work more quickly and integrate your systems more effectively.” It has many limitations such as we cannot use it for real-time web applications and its templates are not well-suited for larger projects.

Does Django Have A Future?

Though Django is an old framework it doesn’t mean that it doesn’t have a future. Django has a vast future for web developers and backend developers.

Django will be still relevant for the upcoming next 10 years so you can learn it.

How To Setup Django?

Setupping a framework or a language is very important and the very first step for development. Django is pretty easier to set up than any other framework because of the pip package manager of Python.

On Windows, you can download and install Python from this link https://python.org/downloads/.

After installing Python and pip you can install Django by running this command.

What do you think other reasons should be on this list? Let us know in the comments.