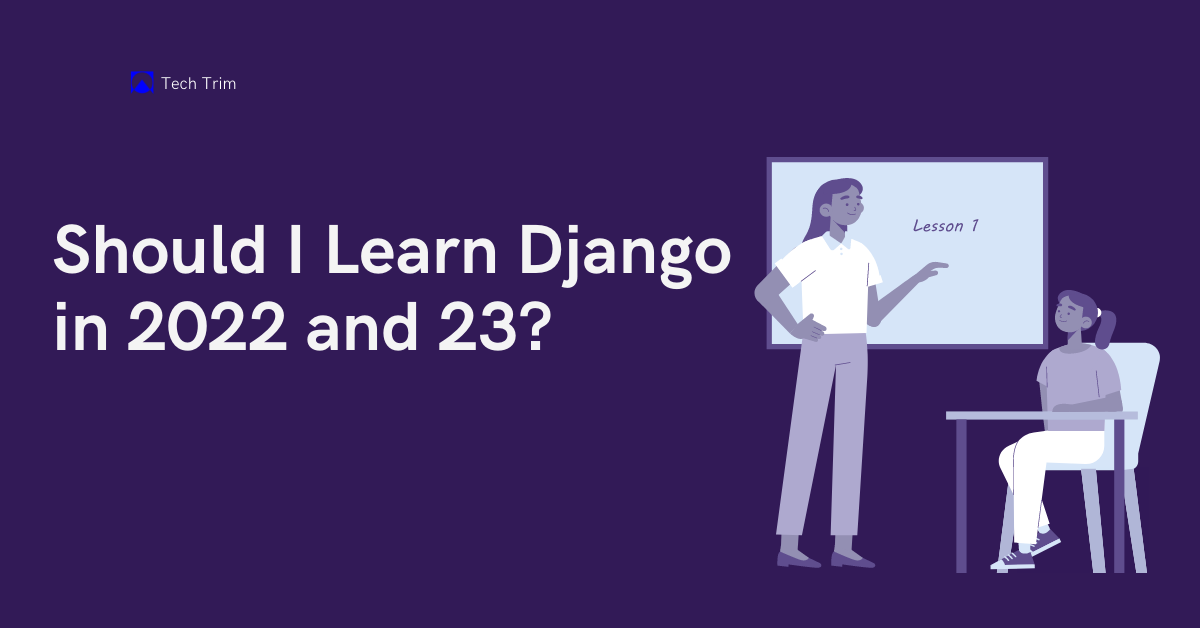 Some of the largest websites in the world, including Instagram, Pinterest, and Spotify, use Django. Many developers choose to learn Django because it is easy to use and has a lot of features.

In this article, you will get a clear view of should you learn Django in 2022 and 2023. Let’s start by what Django is.

Django is a free and open-source web application framework, written in Python. It encourages rapid development and clean, pragmatic design.

Adrian Holovaty and Simon Willison created and released it on July 21, 2005.

The one-word answer is YES if you know Python.

You should learn Django in 2022 and 2023 because it’s very famous, powerful, and easy to learn and use. Furthermore, many well-known companies also use Django and you can easily get a job in these companies.

You can learn Django with confidence because it is a very future-proof framework and it will be used for at least the next 10 years.

Django is a very powerful and versatile web development framework. Following are some of the reasons, to learn Django.

Now, let’s understand every reason to learn Django in detail.

Django also hides the frontend source code of your website so that no one can even copy your frontend code.

Django is very fast compared to other programming languages and frameworks like PHP and Flask. Even though Django is made in Python but it’s still faster and more efficient for development.

Fast websites are also recommended by Google for better ranking.

3. Easy To Learn and Use

Python and Django both are very easy to learn and use. Python is also said to be the simplest programming language.

Django follows MVT (Model View Template) architecture which makes it a little harder to use but with little effort, you can do it easily.

The database is a very important aspect of a dynamic website. In some frameworks, creating and connecting to the database is very hard. But that’s not the case with Django.

Django has a built-in database called PostgreSQL which is quite a fast and popular database.

Django is a cross-platform web development framework. The websites created in Django will work the same on Windows, Linux, and Mac.

As Django is a very popular web development framework, it has very huge community support. There’s a chance that the solution to your problem is already there on the internet.

Furthermore, the documentation of Django is friendly as well which also covers several common problems and mistakes.

Django comes with very easy-to-understand and beginner-friendly documentation. It guides you from installing Django to creating your first app.

Django is a very scalable and future–proof web development framework. Because of its scalability, many developers use Django for their big projects (websites).

There’s a built-in admin dashboard in Django. The admin is enabled in the star project’s default project template.

Django admin dashboard can be used to add, edit, and delete objects from the database of your website easily.

There are some disadvantages to learning Django, even for fans of the framework. It’s up to you whether these drawbacks are a concern; if they’re not, then feel free to learn Django.

Django Can Be Hard To Learn

Django is a very powerful framework, but it’s also hard to learn. It can take some time to wrap your head around all of its features and how they work together.

If you’re just starting with web development, you might want to start with a simpler framework before moving on to Django.

Projects May Be Time Consuming To Setup

Django is not easy to set up like PHP. It requires some basic kernel skills (commands) which may be hard for some people.

You can learn how to set up Django by reading this blog post.

When you create a new Django project, it auto-generates a lot of code which includes Python files. This pre-generated code can be very difficult for beginners to understand.

How To Learn Django?

There are a few different ways that you can learn Django. Following are some of the popular and best ways to learn Django.

Books are one of the best sources of learning anything, especially programming. Django books will help you learn the framework quickly and efficiently. They will show you the best practices for building a Django app.

YouTube and Udemy are great sources for finding the best video tutorials, and courses.

Other online resources include online videos, text tutorials, and ebooks.

Django is an extremely powerful and very popular web development framework. That’s why many famous companies use it. Following are some of the well-known companies that use Django.

Django is a very powerful and popular web development framework written in Python. Yes, you should learn Django in 2022 and 2023! Django is very future proof and it would still be used after 10 years.

Even though thousands of companies also use Django so you could easily get a job there and build your programming career.