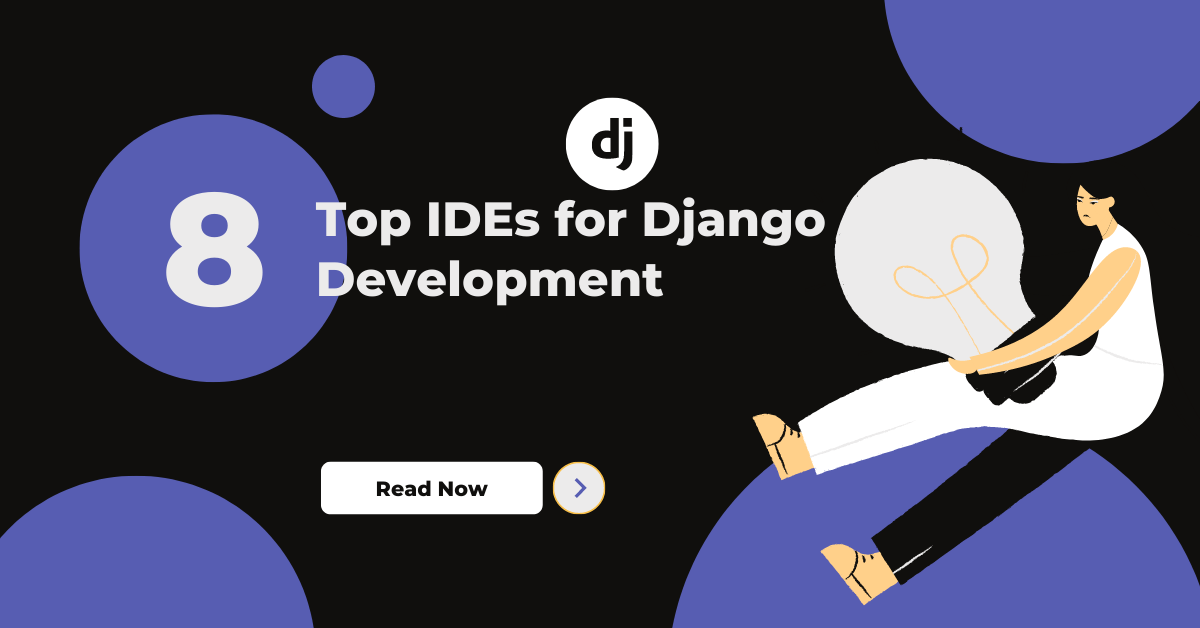 Django is an open-source, robust framework that gives freedom to developers. Some people use IDEs that are not even built for Python and Django development resulting in unproductivity.

This post will discuss the best IDE for Django and seven more code editors or IDEs for Django that will help you increase your productivity while developing in Django.

Why is an IDE Important?

An IDE (Integrated Development Environment) consists of all the development tools that you need, such as a compiler, terminal, debugger, and interpreter.

Using an IDE is important because it increases productivity and saves a lot of time.

Now, you know the importance of an IDE for development, so let’s get straight into our top picks.

The reason for PyCharm being number one is its built-in features for Python development such as Code Lint, Unit Testing, and an in-built debugger. Many programmers consider it to be the best IDE for Django and Python because of its features discussed below.

Good For Python: PyCharm is designed primarily for the Python programming language; therefore it includes some extra capabilities for Python.

Code Snippet: PyCharm provides a code snippet (recommends a function or method to use) whenever you write a word. It makes it faster to code in PyCharm.

Visual Studio Code or commonly known as VS Code is one of the powerful IDEs for development in Django. It’s also considered to be the most productive and user-friendly IDE.

The reason VS Code is so popular and powerful is that it has a huge extensions marketplace that includes tons of free-to-use extensions furthermore, it’s developed and maintained by Microsoft.

To improve productivity, and fix mistakes in your Django code, install the VS Code Django extension.

Popular: Despite this, Visual Studio Code remains the most popular IDE.

You may get VS Code from here https://code.visualstudio.com/Download.

PyDev is a Python plugin for Eclipse, which can also be used to develop a Django project. It allows the user to use Eclipse as a Python IDE.

The reason PyDev is among the best IDEs is that it’s developed specifically for Python, including its libraries and frameworks like Django and Flask. It’s also one of the best IDE for Django.

Integration with Django: The terminal of PyDev makes it very handy to install and use Django.

Atom is also one of the best IDEs for Django. It’s open-source, free, and strong, with support for many plug-ins built-in for Django development.

Auto-Complete: Sublime Text includes a fantastic function called auto-completion, which allows you to write code quicker and with fewer errors.

NotePad++ is a free, open-source integrated development environment (IDE) that supports programming in a variety of languages, including C/C++. It also offers tools for code completion and project management. NotePad++ is a text editor that is available for Windows, macOS, and Linux.

It was developed and maintained by a developer named Don Ho.

Lightweight: Notepad++ is a relatively lightweight IDE, which explains why it runs so smoothly.

Huge Language Support: Many languages are supported by Notepad++. It is compatible with nearly 50 programming languages.

Syntax highlighting: Whenever you write a keyword or declare a variable in Spyder, it highlights it in different colors, which improves the programming experience.

IDLE (Integrated Development and Learning Environment) is another best IDE for Python. It has been bundled with implementing Python by default. It’s completely written in Python for Python development.

Cross-platform: IDLE is cross-platform like any other IDE for Django. You can use it on all operating systems including Linux.

Django is a Python web development framework used by several famous companies. You need to choose the best IDE for you.

Now that you’ve had a look at the list of the best IDEs for Django development, it depends on you which IDE you want to use. Because everyone has their preferences and tastes.

But keep in mind that any IDE you choose should be fast and has special features of Python and Django development.

What do you think which IDE for Django is best? Let us know in the comments.